Officer Killed on her first day on the job 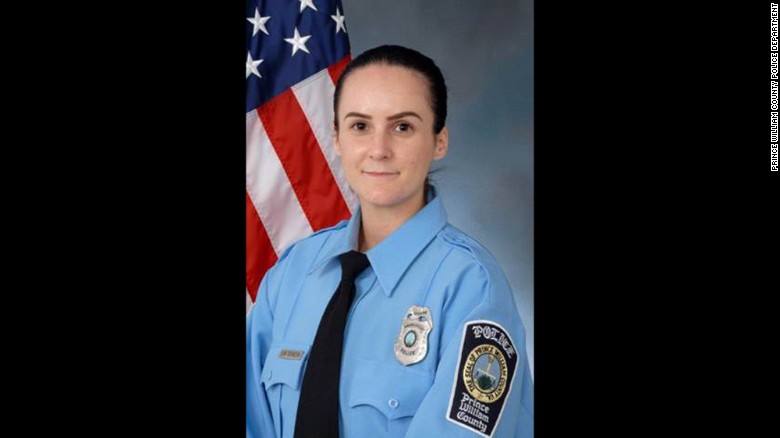 (CNN)A police department in a Washington suburb is mourning an officer who was killed during her first day on the job.

Ashley Guindon, 28, of the Prince William County Police Department was fatally shot Saturday in Woodbridge, Virginia, while answering a domestic call in which two other officers were wounded and the suspect's wife was killed, county police Chief Steve Hudson said at a news conference on Sunday. Guindon had taken the oath of office on Friday.

"The Prince William County Police Department is in deep mourning," Hudson said. "This is a sad day for everybody in this room, a sad day for law enforcement."

Ronald Williams Hamilton, 32, is accused of shooting the three police officers as they approached the front door of his house about 5:30 p.m. Saturday, Hudson said. He surrendered to backup officers who arrived after the three officers were shot, Hudson said.

"The investigation revealed that the accused and his wife were involved in a verbal altercation which escalated physically," he said. "The wife was able to contact police; however, before officers could arrive, she was allegedly shot and killed by the accused."

The couple's 11-year-old son fled the residence before the shooting, the chief said. Family and friends are caring for the boy, he said.

Two guns, a .45-caliber pistol and a rifle, were found in the house, Hudson said.

Hamilton is an active duty Army staff sergeant assigned to the Joint Staff Support Center at the Pentagon, said Cindy Your of the Defense Information Systems Agency at Fort Meade, Maryland.

He is being held without bond and is scheduled to be arraigned Monday.

Commonwealth Attorney Paul Ebert said he "likely" to seek the death penalty but hasn't made a decision yet.

Wounded were Officer Jesse Hempen, 31, who had been with the department for more than eight years, and Officer David McKeown, 33, a 10-year veteran. They were taken to Inova Fairfax Hospital and "We're led to believe their recovery will be full," Hudson said.

A day before the shooting, the department tweeted a photo of Guindon after her swearing-in.

Hudson said Guindon interned with the Prince William County Police Department while she attended graduate school. She officially joined the police force in 2015 and finished training in June, but she took some time off for "personal reasons."

She decided to come back and was sworn in to the department on Friday.

"We were struck by her passion to do this job," the chief said. "She couldn't get it out of her blood. She clearly had a passion to serve others that went beyond herself."

Before Saturday, the department has had three officers killed in the line of duty since 1970, it said on its website.
Click to expand...

it hits hard especially on the first day on the job.

Premium Member
Yes, I saw that last night. That's sad about police officer got killed on first day of job.

I'm sure this killer will get death penalty - see capital crime.

Prince William County was my old hometown, not far from DC.

Premium Member
very very very sad to hear about this.....

This brought tears to my eyes when I heard this on the news . 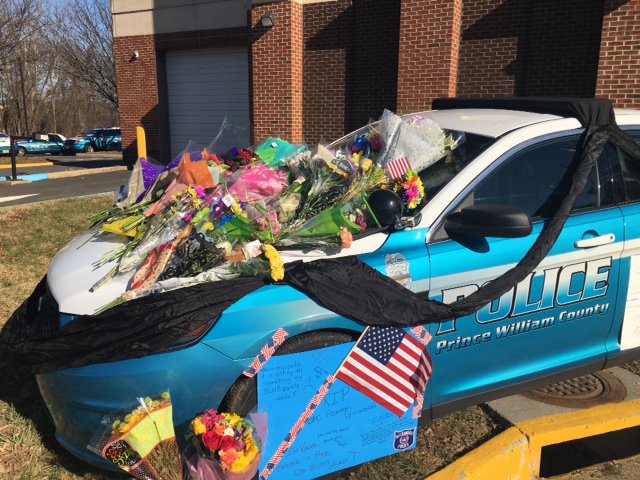 Premium Member
death penalty is not good enough for this.

That is so sad. First day on the job.

That's horrible; I can only imagine what her family and friends are going through.
Last edited: Mar 1, 2016
A

Being police officer is not easy job, that is why Police face severe shortage of recruits. She was brave enough to join and died from what she put her heart for everybody's safety. RIP.


This tell more about the fallen hero .

Today, the Prince William County Police Department sent out a biography on behalf of Guindon.

Officer Ashley Marie Guindon of Woodbridge, VA was killed in the line of duty on February 27, 2016. Formerly of Merrimack, New Hampshire, she was the only daughter of Sharon Nowack Guindon and the late David Guindon. She was 28 years old.

Officer Guindon graduated from Merrimack High School in 2005 where she belonged to the cheerleading squad and Jr. ROTC. In 2007 Officer Guindon enlisted in the U. S. Marine Corps Reserve, serving as a Field Radio Operator and in various aeronautical capacities. She earned numerous awards until her tenure ended in 2013. Officer Guindon attended Embry-Riddle Aeronautical University graduating in 2011 with an undergraduate degree in Aeronautical Science. She later attended Fort Lee's Mortuary School, where she was awarded a meritorious mast for achieving the highest GPA in her class. In 2011 Officer Guindon relocated to Virginia to pursue graduate studies. During this time she interned with Prince William County Police Department's Forensic Services Bureau. She had a stated goal of serving as a crime scene investigator, and it was her overwhelmingly positive experience with that Bureau that led her to eventually apply as an officer. On June 19, 2015, she graduated from the Prince William Police Criminal Justice Academy as a member of Session #36. Officer Guindon resigned for personal reasons before completing the Field Training Program, but later told friends she missed police work from the very day she left. She was rehired in February 2016 and began her Field Officer Training the evening of February 27, 2016.

Known as a bright, ambitious, and kind hearted "fashionista" by those who knew her best, Ashley loved dancing, reading and traveling. The only thing that rivaled her fascination of birds and nature was her love for her furry best friend, her pet pug, Scout. Ashley was destined to wear the badge, but her service to her community began long before her days as an officer. She assisted the Marine Corps Mortuary Affairs Office while serving in the Reserves, worked as a pre-hire with Prince William County Police Special Victim's Unit, and volunteered extensively with the Suicide Prevention Program, a cause near to her heart. Ashley Guindon is deeply loved and sorely missed not just by those who knew her best, but by everyone who is touched, not by how she died, but how she lived. Such is the fate of a hero.
Click to expand...

Premium Member
This is another sad story with a Charleston connection.

"The alleged gunman's father, Ronald Whaley Hamilton, a retired major with the Charleston Police Department in South Carolina, said over the weekend that his son had a 'very good upbringing.' The elder Hamilton said his son joined the Army at age 18 and worked in information technology. . .

Hamilton described his daughter-in-law Crystal Hamilton, 29, as a 'kind, humble, energetic and wonderful person' who worked with wounded soldiers returning from Afghanistan and Iraq. He said that she and his son met after high school in South Carolina."


The shooter's other victim, his wife, also from SC: